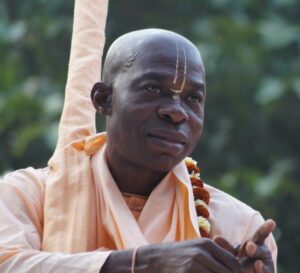 Bhakti Dhira Damodara Swami was born Oko Odama. His parents hailed from Ogoja, Cross River, Nigeria and practiced African Traditional Religion (ATR), but he grew up as a Roman Catholic. From a very young age he has been very spiritually minded and he studied the Bible intensely with the sole aim of understanding God and His entire creation. He once asked his Bible teacher about the concepts of reincarnation and karma and the teacher, in anger, told him that his questions were unbiblical. Not satisfied with the response, he started searching for answers in other faiths. He associated with various spiritual groups such as the Rosicrucian Order and Aetherius Society, read all of Lobsang Rampa’s books, practiced haṭha-yoga with a representative of Roy Eugene Davis and also corresponded with the spiritual organization founded by Al G. Maning, an American psychic. Meanwhile, he also pursued Electrical Engineering and was an upcoming reggae artist.


Later, in 1980, while he was working with Costain (West Africa) Plc. in Lagos, Nigeria, he came across an advert in the Daily Times newspaper by the Hare Krishna movement. The advert was about self-realization: karma, yoga and reincarnation. He wrote to them and received a copy of Back to Godhead magazine, which he did not read thinking it to be just an Indian magazine on vegetarianism because of the vegetarian advert on the back cover. The following year the same advert came up in the newspaper; he wrote to them and received another issue of the magazine. He then read the two issues—the recent one as well as the previous one—cover to cover. Inspired, he made a visit to the ISKCON Temple in Lagos. There, he not only very much enjoyed the prasādam (spiritual food), music, and dance in the company of the devotees, but was also very satisfied with the answers to his questions on reincarnation and karma. That impelled him to go deeper in the understanding and practice of bhakti-yoga. Hence, in 1982 he moved in the temple as a resident devotee. While in the temple he continued to work on his reggae musical album but later discontinued to dedicate himself more fully to the pursuit of spiritual life.


In 1985, he received formal initiation (dīkṣā) from His Holiness Bhakti Tirtha Swami, a disciple of Śrīla Prabhupāda, the founder-ācārya of the International Society for Krishna Consciousness and brahman (second) initiation in 1986. With much dedication, he served the movement in various capacities, and on 25th Mar 2005 in Mayapur, India, he was awarded the renounced order of life and given the name “Bhakti Dhira Damodara Swami” by His Holiness Jayapataka Swami on behalf of His Holiness Bhakti Tirtha Swami who left this planet 3 months later. Later, from 2011, he also started serving in the capacity of an initiating spiritual master (dīkṣā-guru). He, thus, became the first African sannyāsī and dīkṣā-guru in ISKCON. He has also served as GBC of West Africa for more than 5 years.


Over the years, Bhakti Dhira Damodara Swami has become known for his humility, gravity and deep knowledge of the scriptures. He has recently authored a book–Spiritual Connection: Understanding the dynamics of Guru-disciple Relationship. He tours and preaches extensively in different countries in Africa, in Brazil, India, Mauritius, the Seychelles and the United States. He also regularly teaches Bhakti-śāstrī and Bhakti-vaibhava courses at the Vrindavan Institute of Higher Education (VIHE) and the Mayapur Institute (MI) and facilitates numerous seminars on the practical aspects of Krishna consciousness philosophy, such as community-building, self-sufficiency, etc. Following the desire of his spiritual master, Bhakti Dhira Damodara Swami is also developing vibrant Krishna conscious self-sustainable farm communities in Ghana and Nigeria, Africa. 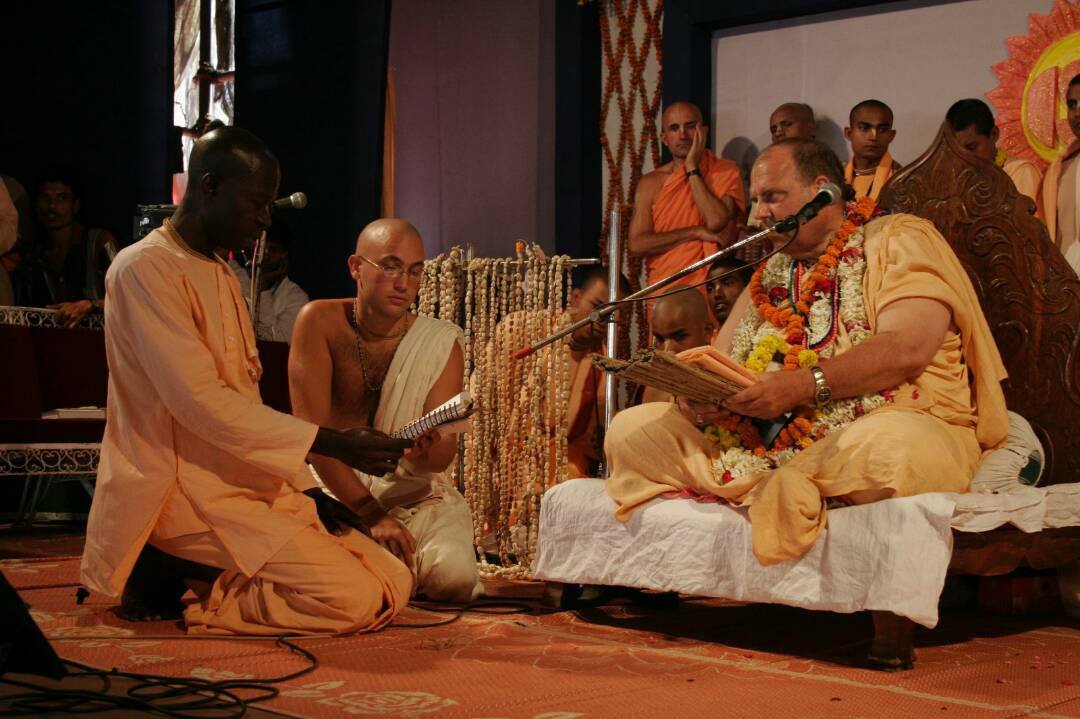