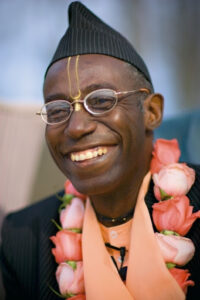 Bhakti Tirtha Swami was born John E. Favors in a pious, God-fearing family. As a child evangelist he appeared regularly on television. As a young man he was a leader in Dr. Martin Luther King Jr’s civil rights movement. At Princeton University he became president of the student council and also served as the chairman of the Third World Coalition. Although his main degree was in psychology, he received accolades in many other fields, including politics, African studies, and international law.

Bhakti-Tirtha Swami’s books are used as reference texts in universities and leadership organizations throughout the world. Many of his books have been printed in English, German, French, Spanish, Portuguese, Macedonian, Croatian, Russian, Hebrew, Slovenian, Balinese and Italian.

A specialist in international relations and conflict resolution, Bhakti-Tirtha Swami constantly traveled around the world and has become a spiritual consultant to may high-ranking members of the United Nations, to various celebrities and to Several chiefs, kings and high court justices. In 1990 His Holiness was coronated as a high chief in Warri, Nigeria in recognition of his outstanding work in Africa and the world. During Nelson Mandela’s precedency of South Africa, Bhakti-Tirtha Swami met several times with the leader to share visions and strategies for world peace.

In addition to encouraging self-sufficiency through the development of schools, clinics, farm projects and cottage industries, Bhakti-Tirtha Swami conducted seminars and workshops on principle centered leadership, spiritual development, interpersonal relationships, stress and time management and other pertinent topics. He was also widely acknowledged as a viable participant in the resolution of global conflict.

HH Bhakti-Tirtha Swami passed away on June 27th, 2005. He was suffering from advanced melanoma cancer. His realizations during the year he was fighting cancer are amazingly deep and profound, they can be read in the book he wrote during this time – “The Beggar IV, Die Before Dying” and in the many letters and classes that he gave. His passing was like his life, a deep expression of love and compassion, and a lesson for us all.